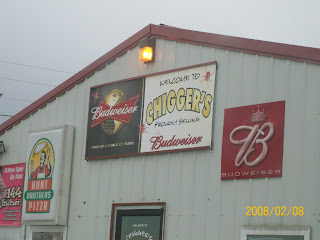 Events of last week gave me little time on the computer to blog. Here is the story of one reason.

On Friday Husband decided we needed to go look at a trailer he had found on Craig's List, I think. He has been looking for a trailer long enough to haul his backhoe in. Anyway, said trailer is in Kansas; Fort Scott, Kansas, which is about a 2-3 hour drive from where we are. Since I am always up for an adventure I decided to tag along. Of course the baby had to come too. So we got everything packed and headed off to KS.
The weather was overcast so it was rather nice, though we ran into a few showers in KS. We went through a series of little towns; just little wide spots in the road. I always like going through these little towns because they have these signs with the town name and the population on them; little towns you'd never find on the map whose names I can't remember now, but one population notation was: 249. Some towns we go through make you wonder what the origin of the name was; Moundville, Fair Play, Filley...
When we got there turns out the guy who had the trailer for sale was the caretaker of one of the cemeteries there in Ft. Scott. A rather large cemetery which fascinated hubby. The caretaker had a couple backhoes and other large equipment; he dug the graves and did the lawn work. Said in spring and summer; grass growing season that is, all he got done was mowing and weedeating the grass. So far, there at his cemetery, he's only done one grave this year.
We look at the trailer. Hubby is impressed and whips out his checkbook. Then we head back. By this time we are need gas rather badly; we are down to our last 1\4 of a tank. But gas is a bit more expensive in KS than in MO, so we head back to MO. Hubby never wants to go back the same way we came so we take a different route. But we keep going and going and no sign of a gas station in sight. We come to Sheldon, MO. A small podunk town. We took a tour around the back streets and finally found a seedy looking place called "Chigger's" with rather antiquated gas pumps out front. We pull in and a seedy looking car pulls in next to us. While hubby is gassing up I see him talking to the young guy, who laughs.
Hubby later says the guy told him that Chigger's is the only place in town that sells gas; which is why the price is no cheaper than what we saw in KS.
Anyway. For some reason this Chigger's place just cracked me up. As you can see from the sign, it appears to be the local watering hole for more reasons than one. They make sure you know that you can get you some Bud there. And a pizza too. What was so funny to me is that it certainly seemed appropriately named. If you live where you have never heard of or met a chigger, my friend, you live in paradise. Check here to see what you are missing. I grew up not knowing a thing about chiggers and I never appreciated it. A chigger is the larval, parasitic stage of a mite. When we were kids we would spend our summers out in the fields rolling around in the grass. Never had to worry about ticks either. Ah, the good old days!
Posted by Calfkeeper at 4:09 PM

What fun to make that 2-3 hr drive to Kansas with your hubby and baby! I also love tagging along with my hubby for farm related things. Hard to believe that this city girl loves going to the Plowing Match and Outdoor Farm Show! LOL! I LOVE it!

Oh, we've got news! Not exciting to some, but I thought you'd be able to appreciate it! LOL! We just got a new bull! We've got Charolais and Hubby wants to introduce more Red Angus into the herd. We've now got a lovely Red Angus bull who is about a year old.

I like going on adventures, too. We go to farm shows sometimes.

Yes, a new animal is always fun, too. Ha. Especially a bull!