To name or not to name....that is the question 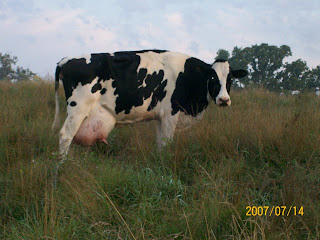 ( Here is a picture of S.E. -who is no longer with us. This was right before she calved and as you can tell she was a victim of hundreds, if not thousands, of years of breeding to get bigger udders on cows. But more on that later perhaps. I took this pic to get a shot of her markings; an upside down baseball mitt catching a ball. It's not real clear in this pic, but you can kind of see it.)

OK-so once again I fell down on the NaBloPoMo job by not posting yesterday-it's amazing how life gets in the way of my hobbies...ha ha.

Since I haven't prepared what I want to post I will just go from a comment C left and talk about naming cows.

I think I have mentioned in a previous post that I try to avoid naming or getting attached to them at all costs because you never know when one is going to croak or go bad on you. The first calf I lost I cried over and she was only about 3 weeks old. And in fact in the past 3 years since I have been here and maybe longer than that we have had new heifer problems. We raise our own heifers, husband hasn't bought any cows or calves in ages and he's been in the business for about 20 years, and it would seem that milker quality has been going downhill. Husband says he's going to start calling the place Three-Tit Farms, because many of the new heifers' udders only operate on 3 spigots, as it were, or else they start off w/ mastitis, which is bad news and usually means a trip to the auction. The last few heifers have been pretty good, so we are hoping things are looking up. We went with a different bull breeder this past go-round and are hoping that improves things.

Anyway, back to naming, or not. If a cow or calf has an official name around here it is because we registered her w/ the Holstein Association. So Red Rosie, my ID pic calf on NaBloPoMo-who is actually due to calve here in a month or so-is registered, otherwise I probably wouldn't have named her either. For all we know she could die calving, which happens occasionally. She is officially #G32, and just here a month or two ago #G23 had a breech presentation and died-well, husband had to shoot her.

However, so many of the cows have their own personalities and thus they get named in spite of our no name resolve. Usually it's initials; S.E. (Split Ear-she lost her ear tag); UK, UK1, UK2, UK3 (all of which stand for UnKnown-they lost their eartags too!), BOF (Bump on Foot), BOB (Bump on Bag), UT (Udder Tilts) or RC (Renegade Cow). Then there are the trait names: Messy (Red Rosie's mother-she leaves a most generous pile in the milking parlor almost every time), Fluffy (story about her name in an earlier post), Pee-Wee (self explanatory) and The Black Witch. This last one nearly creamed my husband as he was trying to pull her calf and she was a terror her first year of milking; kicking, squirming, butting around in the milking parlor.
OK, I am going to stop for today.
Thanks for visiting!
Posted by Calfkeeper at 8:27 AM

I love your blog!

As much as I know how hard it is to not get attached, and how Hubby doesn't want me naming the cattle beasts, I just can't help it. We have these two bulls who are named Alfie and Curly. It's hard not to become attached to such beautiful animals. Again, I sometimes think I'm not cut out for that part of farming (the having to sell the cattle and knowing where they are going after they leave our farm).

I love calving season. All the new calves are just adorable!

Oh, I've linked you to my blog :) Happy NaBloPoMo-ing! xo

Those cow names are hilarious. I say name. You are going to be attached regardless, may as well have a giggle. Where is the story about how Fluffy got her name?