A Typical Monday and a Little Beauty 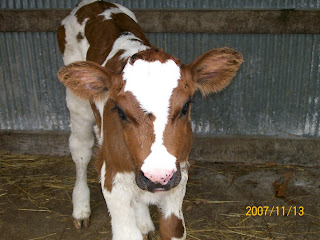 (OK. I joined NaBloPoMo (National Blog Posting Month)-meaning I am supposed to post every day for November, but I haven't been doing a very good job of it. I joined late so I guess it doesn't matter for this year anyway.)

Yesterday my husband had one of those Mondays. On Sun evening at milking time he noticed that our expectant heifer was acting funny, so he rounded her up and got her in a pen by the corral. At 2:30 AM he dons his boots and heads out to check up on her. Sure enough, she's got a calf, but somehow it has slipped UNDER the corral and Mama Cow is having a fit to get to it. So he has to drag the calf around, in the dirt and whatnot, and rearrange portable cattle panels so cow and calf can be reunited and not mix with the rest of the herd. In the process one of the panels falls down on the back of his leg. He comes back to bed and tells me nothing of what's gone on. At breakfast a couple hours later he tells me we have a healthy heifer calf, but, he says, she's kind of a funny color. At 2:30 AM it's hard to tell what color anything is, even with flashlights.
When he goes back out to milk the calf has once again got to somewhere she shouldn't be so he has to drag her around again. In the process he strains his back. Sigh.
But never mind his problems (he's OK by now); look at the calf. Isn't she a beauty?! Her dam and sire are both black and white Holsteins, but she is red with pretty black highlights. To me she looks like she got into her mom's mascara and used it on her lips as well. What happened is that a couple cow generations ago we had a bull whose sire was a registered Red Holstein. Every once-in-awhile those genes pop up unexpectedly. We have one other red heifer from this and she is about to calve here in a month or so. But she is completely red, not like this little gal.
Anyway, we are hoping this calf retains this coloring and that she thrives. Normally we make sure NOT to name them, but she needs a name I believe. I am not good at naming calves much; with great lack of originality I named the other red heifer; Red Rosie.
Any suggestions....
Posted by Calfkeeper at 2:38 PM

She's gorgeous! It looks like someone has put some icecream on her head and it's melted down. :D

There is a married couple who live near to my aunt. They've had 4 Red Setter dogs in the time my aunt has known them, and each one has been called "Red". How imaginative. :D

Why am I not seeing a picture of the calf?

Oops, sorry; I guess it hadn't finished loading. I see her now, and she IS a beauty.

Beautiful photo!
Hubby won't let me name any of our calves! LOL! I got attached to this one little guy, who went by the name 5-S (LOL! His ear tag #). One day, I went to the barn to see my little buddy and to my surprise, he was gone! I asked Hubby where he was, and he didn't say anything. That was the day the truck came by to pick up the cattle to send down south.

I was depressed for weeks. It was then that I questioned whether I was meant to be a farmer's wife. I didn't know that I'd get so attached to the cattle. Hubby keeps reminding me that I have to get used to life and death on the farm. It's so hard sometimes. I know, I know. Suck it up, princess! LOL!