Every spring when I set out those little sweet potato slips I always marvel that they will eventually take over the area and become a writhing mass of lovely vines.

They are very popular with the deer and groundhogs. Hubby's aunt's sweet taters were decimated by the deer. The tater part didn't get a chance to develop. The deer would eat the leaves as soon as they grew. My mother in law's sweet taters were decimated by a groundhog; they could see it running for cover sometimes when they went out there. Originally they'd thought it was a deer getting them, so they set a hotwire, but the leaves still kept disappearing. ARGH! I think just now they have finally started growing out, but we aren't too sure that the roots will have time enough to develop.

You are supposed to wait until just before frost before you harvest; but I always jump the gun. I pulled maybe 3/4 to 2/3 of ours already last week. I couldn't wait to see what was under there. This was my take so far: 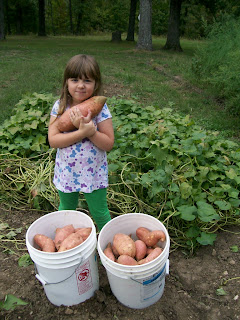 Ellen is holding the biggest one I have ever grown so far. I think it was about 2-3 pounds; but my scale isn't the most accurate.
Posted by Calfkeeper at 8:08 PM

Ah, wonderful baked sweet taters! Yum! The little bitty ones are wonderfully juicy and when you wash them and grease them before baking, you can eat peeling and all! Adorable, cute little sweetie pie, too!