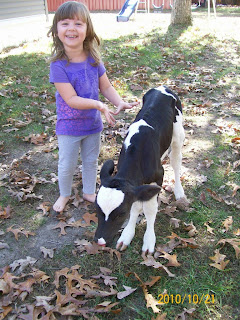 Last Wednesday we had a set of twin heifers born. One didn't make it. We brought the live one back here and I got some colostrum in her; she was really tiny and wasn't able to stand. Hubby looked at his records and found that they were a month early. I didn't post anything about it because I was afraid she wouldn't make it. The above was a shot of her and Ellen on the second day; Thursday.

On Fri and Saturday she went downhill, so much so that I pretty much gave up on her as well. But happily enough she came around, started guzzling her milk and standing up on her own. On Sunday night I put her in her own little calf house. She's pretty perky now. I got pictures of her today, but don't have time now to upload and post them.

As you can tell by the above pic, Ellen was enthused about her. She kept giving her sticks and trying to get her to fetch, like a puppy. Now that the calf's in her own house, Ellen has lost her enthusiasm, it's just another calf to her. We doubt that this calf will amount to much as a cow, but they all deserve a chance.
Posted by Calfkeeper at 2:21 PM

I hope she makes it ok! Very cute! Ellen probably loves all of it, doesn't she? :)