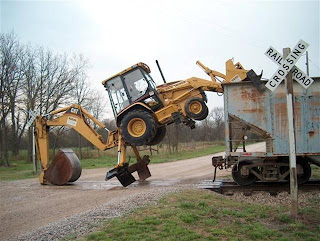 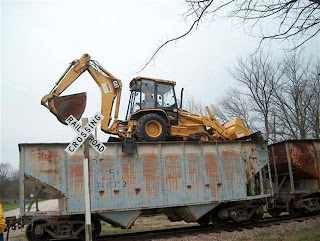 OK, so this isn't of hubby's equipment in these pics, but hubby found them on Heavy Equipment Forums and was fascinated by them. Apparently this is how they unload coal from railroad coal cars. There were several other pictures in the series between these two positions, but I don't want to take time to post them all. It looks pretty freaky to me. In the forum discussion they were saying that the backhoe is modified specifically to do this type of job.
The sick calves are still holding in there, though we don't know for how long. In one comment C stated as how it seemed they lose all the male calves. In yet another forum on Homesteading Today, they have had discussions about how it is always the male calves that seem to die. Some folks believe that the females are just stronger than the males, some say it depends on the sire and some say it is just the luck of the draw. I dunno. We seem to have them both die equally on us. Which isn't to say we have a high mortality rate, but when they DO die, it doesn't seem to discriminate between the sexes.
Posted by Calfkeeper at 9:56 AM

Hi!
Thanks for posting this! How interesting about the calves. Good news...We had one male calf born the other day and he's doing well! The rest are all female. We still lost quite a few this calving season...more than usual. :(

Love the heavy equipment photos! Hubby has a bunch of sites that he peruses on the internet and he's shown me quite a few of these crazy photos of farm equipment disasters/accidents. I can e-mail them for you and your hubby if you wish! Shoot me an e-mail and I'll reply with the photos!

I sure hope hubby isn't thinking of getting his equipment modified! That looked VERY FREAKY to me.

That came out a bit odd.

I get a little sad about the cows, don't you? I guess that's farm life, the good, the bad, the ugly.

c-sure that'd be interesting. I'll get an email off to you soon as I can. Hope the little bulls do OK from now on. It's tough losing them.

21094-ha...no hubby isn't going to get his equipment modified...in any sense of the phrase! It's depressing about losing calves and cows, but that's farm life.

wow, some machines those are CK