It was a normal Thurday morning: The baby was down for her nap and I was cleaning up from lunch (we eat lunch at about 10:30 AM, due to the fact that we eat breakfast at 4 AM) and boiling some eggs for later use when the call came in.

Husband answered; it was his aunt calling to say that she had opened her front door and there was a milk cow standing on her front walk, looking at her. (Our property borders theirs) There was one other cow standing around out front and three more out in their pasture.


So before baby Ellen knew where she was I had her plucked from her crib, bundled in a coat and shoes and her father was whisking her up the road to Grandma's house for a while. Meanwhile I went out and got the white 4-wheeler and went up to asess the situation. Hubby was right behind me with his chainsaw and fence repair tools in the red 4-wheeler. 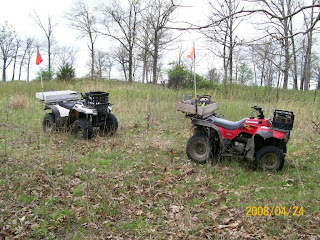 We got up there and find hubby's 92 yr old grandfather out chasing the escapees up the road the opposite way we wanted them to go. But by means of some shooing and stick-waving we got all 5 escapees back to where they belonged. Then we had to go check out the fence situation. There were some smaller trees that had fallen across it and pushed it down, so I helped hubby get the wires back into place. It wasn't as bad as it could have been, but your heart always does a big leap when you hear that there has been an escape.
Here is a shot of one place where hubby fixed the fence; by using a tree. It had been used before, as you can tell from the old rusted wire that has grown into the tree at the bottom of the pic, off the the right of center. My own father would have had a fit to see that as he would never put metal into a tree in the event he might want to use it for lumber, but hubby has no such qualms. 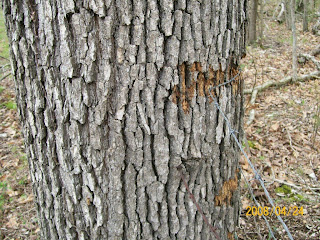 Posted by Calfkeeper at 1:50 PM

ah the life of a farmer!

heh, don't ya though? Never a dull moment, bet you have had times like this too, no?

Didn't you have to chase horses up here once? Ha! I remember that.