Insurance on the Dairy 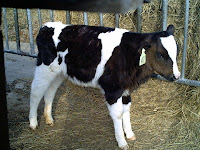 For those of you who are self-employed I am sure you can relate to the whole insurance headache. My husband has a second part time job which insures us, but when our baby was born 7 months ago we decided to get her coverage from a different source. Then, since it worked so well, we decided to get it for me as well. Here is the abbreviated story on how THAT has gone:


The fun began in June of this year.

When he talked to the agent on phone to get a quote he, my Dear Husband, made me 2 inches taller than I am and got a quote for the Premium plan which was $236 p/mo. When I filled out the form I put my real height. Well, the agent calls back a couple days later and says when he turned the application in they had to adjust it because I am four pounds too fat for my height (well, he didn't say that, but that's what it comes down to; 4 lousy pounds) to qualify for the low rate Premium plan, and to keep it would be $262 p/ mo. DH didn't want that rate so he called in and said we wanted to change the plan to a gold plan, or some such I forget which. The agent says no problem, just ignore the letter that you will get here in a couple of days. OK.

So, we get the bill in July; it's for the $262 Premium plan still. I also get the insurance card for the Premium plan in the mail. Dear Husband calls the guy. “Oh,” says the agent, “I'll get back to you on it.” Never calls us back. So, DH calls the company and gets someone who says, “Oh you need to call this other number to change the plan over.” He calls it, gets someone who says, “Sure I'll get you set up, no problem, just ignore the bill and we will get something out to you in writing.” Nothing else came in.

August comes, along with the usual $262 premium bill. By this time DH is steamed. He calls again, gets someone who says, “I can fix that for you and the new rate is actually $197. No prob, just send in the $262 and we will apply it to this new rate and you won't owe anything.” Great!

Sept comes, along with the usual $262 bill. The very next day my new insurance card and a welcome to the $236 gold plan letter arrive. Two days later a bill for $472 comes, along with a letter saying we were 2 months behind on the $236 gold plan!! This was last week. (By this time even I, usually pretty contained about such things, am fed up.) DH called again and was again told it was all taken care of and that we only owe $10. I am not sure what happened to the $197 rate, but somewhere it disappeared.

This was enough to really send me into a daze, and the cows and calves had nothing to do with it. Ha. Until you are living the farm life you don't realize that the animals and the land and all won't be your only source of headache and worry.

Anyway, here's a pic of a cute calf to sweeten up this story.

CK
Posted by Calfkeeper at 2:55 PM

I found your blog via Jel's. I don't live on a farm, but since I wish I do, I'll just live vicariously through yours. :) I enjoyed my visit here.

Thank you for visiting. Glad you enjoyed yourself. I hope you come back.

Don't get me started on insurance companies....Health insurance can make you ill. Great style of storytelling. I will be back.