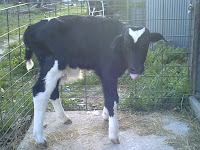 Here is another interesting calf we had last year, I believe.

This one was a bull, so we sold him, but he was funny. I think somewhere along the line he was missing a chromosome or two. My husband said the springs were just missing from his ears, but I think there was something more wrong.

He always had his tongue hanging out, though calves will do that off and on, but he was pretty consistent with it. Also his tail was kinked up. You can see that it is kind of short, but when I felt it some of the bones seemed fused.

Anyway, other than his appearance, he acted perfectly normal and the folks that buy our bull calves didn't seem concerned.

I am working on more halfway funny stuff to post but there's so much that I don't know where to start. Just keep tuning in.

Hi Calfkeeper!
I was directed here by Jel and it sure was worth it! :-)

Goodmorning, Calfkeeper!
Jel sent me over to your site-I am so glad she did. I laughed as I remembered dealing with calves, milkings and the ability of a cow to use its tail and bowel movements as weapons. I could almost see the sunrise and smell the manure! :)LB

Thank you both so very much for dropping in and commenting. Like I said, I am trying to get other fun stuff posted.

I appreciate your visit!

We had a calf (black angus) born today, anywhere from 2-4 weeks early. First baby for the Momma. Momma is has been staying with the calf and is very attentive. However, it doesn't appear as though Momma's milk has come in. So we bottle fed the calf some colostrum, although it drank only about a pint and a half. The calf is able to stand and walk for a few minutes at a time. Only once getting to her feet by herself. We moved Momma and baby to what we call the hospital, which is a small pasture by the house so we could keep a closer eye on the baby. We learned when we were feeding the baby that she is blind in both eyes. We are hoping that she will come out of it, but will keep her regardless. We are praying that she will be stronger tomorrow than she was today and that Momma will continue to be attentive to baby. I very much enjoyed everyone's stories and am very glad I came across this blog.