Sometimes things happen that make me say; "This is totally God."  Others may call it coincidence, but I believe that coincidences are Spiritually influenced.

In 2005 we got a little red heifer; which I blogged about after the fact: Genetic Hiccup.
She was born before I started this blog, so I didn't get her in here at birth.  But here's Rosie's picture: 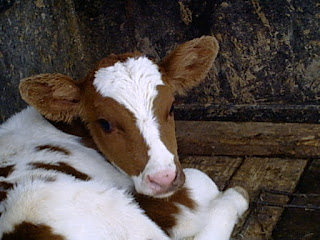 Here is Rosie with her red calf, which was a bull I believe, I can't even remember.  Either it was a bull or it turned black eventually.  I strongly believe it was a heifer that turned black. 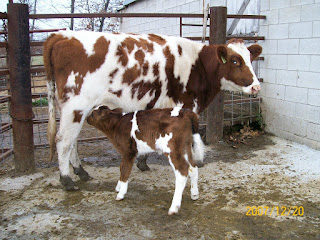 A bit before Rosie calved we had this red heifer calf come along: 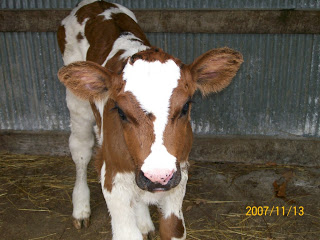 However you can see the black markings on her nose and around her eyes.  I wish she'd stayed like this but she eventually, over the course of 7-8 months, turned a solid black with just a red tinge in her ears and on her udder.

Rosie herself died of some mysterious malady a few years ago; back when Ellen was only 5 or 6.  Ellen was extremely upset over this and cried and cried.  She kept asking for another red cow.  Over time she calmed down a bit about it; but still occasionally mentions getting another red cow.

I told her we couldn't afford to just up and buy a red calf or cow, it would just have to happen again.  And I didn't want to tell her the odds.

But looky what DID happen just 3 or so days ago: 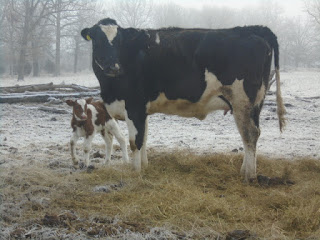 Aw!  She doesn't have any black on her; the calf doesn't that is.  So I am hoping and praying that this is our little miracle red heifer calf for Ellen.  I will get up close pics of her soon.

I know God still answers prayers with little miracles like this.  And for that I am thankful!

Posted by Calfkeeper at 6:03 PM