Often when I am out on my walks I encounter sights that steer my thoughts toward deeper subjects.  Here is one that I encountered last winter.  I have various paths I take the dog(s) walking on depending upon where the milking herd is quartered.  Both coming and going I pass by this old grapevine: 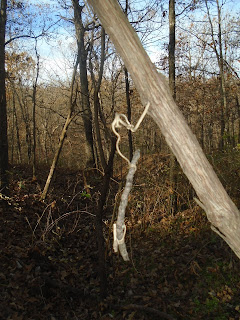 You can see one little dead vine tendril clinging to a dead twig.

The main vine stretches from one tree to the next, so the twig is hanging between the trees.  There is no way to tell how long the vine has held the twig prisoner; swaying in the breeze, for years maybe.

Once upon a time when the grapevine was small it sent out a tendril and caught onto the small limb of a tree.  It needed the support while its central stem climbed higher.

But at some point the vine tore away from the tree, or perhaps it was a small tree that died.  Who knows?  But the main trunk of the vine continued reaching upward into the canopy of the forest, leaving the small tendril hanging there, clinging to what used to support it; both of them dead now.

"Ah, many things this tale might teach ---
But I am not ordained to preach."
(click on link for one of my favorite poems)

For myself I think of all the things I cling to that I don't really need; emotional crutches especially.  But also just THINGS, junk to which I have some sort of attachment.

Some people cling to resentments, dead relationships, whatever.  Things whose era has passed.  We cling to what is no longer alive and relevant to our lives now.

I consider this and think of the things I really no longer need and should no longer hang on to.

Sometimes it's hard to let go.  But with much prayer I am learning to close the door on past things and no longer let them hang there in the breeze of my emotions.

(Thankful for learning how to let go of things and emotions that clog my living in the present).

Posted by Calfkeeper at 2:58 PM