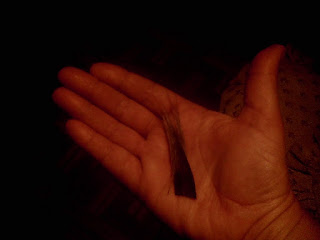 Yes, that's about how long that clipping of hair is.

You'd never guess only that much hair would bring on the end of the world.

Or seem too, at least.

My daughter, bless her heart, has this "THING" with having long hair.  She has never...even when she was too young to really care one way or the other...wanted her hair cut.  She has always wanted long hair.

So about 3 weeks ago when I suggested we trim her hair, Katy bar the door, you'd've thought I'd suggested we cut her head off instead of her hair!  I hadn't trimmed it in over a year, almost 2 years in fact, so it was uneven on the ends and rather raggedy.

O, Lord...talk about carry on!  She summarily refused to agree to a trip to the hair salon, so I must needs do the dirty deed myself.

She wailed and gnashed teeth for a while...then insisted that we get it over with ASAP, necessitating my leaving supper dishes in the sink and heading to the bathroom to accomplish the scalping.

Before and after the dirty deed she insisted on my measuring it.  So, having nothing else, I used a yardstick and got crude measurements of 24 inches before and 22 1/2 after.

I am pleased to announce that yes, she did live.  Here she is with her hair in TWO braids. 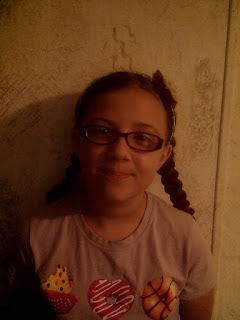 I say "TWO" because for this whole past school year she had insisted on having only ONE braid down her back.  Her bangs have not caught up with the rest of her hair though, so they forever come wisping out of the braid and straggle all over her face.

So after the horrific trimming event she has wanted TWO braids, and that has done wonders for keeping her bangs off of her face.

When she can take care of her own hair I shall mightily rejoice. Yes I will.

My thankful notes:  A daughter who sticks to her principles through thick and thin.  A daughter who makes up her mind as to what she wants and sticks to that.  (Maybe those are the one and same, but who cares...this is my list!)  Braids, which are easy enough to do.  TWO braids instead of one, to keep her bangs off of her face.  A daughter willing to get an ordeal over with, even though she summarily and quite vocally disagrees with the ordeal.  LOL
Posted by Calfkeeper at 2:29 PM

When my Mom was in the hospital having my baby brother, my Popo had to fix two little girls' long hair. He tried to do the French braids, and finally gave up and took us to the beauty shop in Linn MO. If you can French braid, it will hold the bangs out of the way for sure! A little "goo" helps keep the bangs into the braid, too. Yes, Ellen is a one of a kind kid....good for you!

Ha. I sure wish I COULD French braid her hair. It would make life so much easier. But she doesn't have the patience to sit for that long while I practice on her hair. Putting it into two braids does help keep the bangs from falling out, a bit anyway.