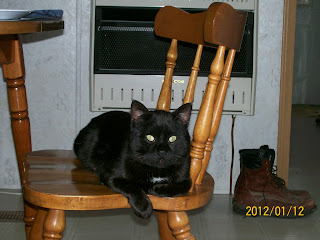 Remember Boo? I think I blogged about him before, but I am not sure.

Anyway. He showed up here on the dairy sometime in September; a stray, just a thin black streak in the weeds. He'd visit my garbage/scrap pile.

It did not take long for him to realize that if he buttered us up he could get more and better food. He mews like a kitten and is quite calm and friendly. I did NOT want this cat. I wanted hubby to take him somewhere else. But Ellen fell in love with him: "He's my favorite color." (Go figure on that one.)

However, he has weasled his way into my heart too, the little black wretch. He keeps me company when I do chores in the mornings; follows me around, scrambles into the feed buckets and eats the calf feed (see number 2 below.). He will even ride on the four-wheeler with me.

He has two faults.

1) He is the kind of cat that loves to walk under your feet and seemingly attempt to trip you up.

2) He loves to eat...if I were to let him he'd eat himself sick. And indeed he has developed that urinary blockage deal that felines get when they get too much of the wrong diet.

Last Monday we had an emergency trip to the veterinarian. $67.77 He couldn't pee. This is fatal in a tom cat. This doesn't yet include vaccinations and neutering. Bless his sweet little heart. We have to wait 'til he recovers from his current ailments...and gets off of the antibiotics I would presume. (Vet was impressed I caught it so soon in an outside cat. Said inside cat owners often don't catch it until really late.)

This condition is bad to reccur. You needs must put the cat on a special diet.

OR, the kind vet said you can put him on a raw meat diet. It'll work if you just substitute about half of his canned food with lean raw meat. The stuff you buy from the store.

We can't afford lean raw meat for OURSELVES much less a cat.

3) He pees in the house when I break down and let him inside.

However, if you mop the floor and swab down EVERYTHING (walls, cabinets, table/chair legs...ect) with Febreze cleaner, you just might get as lucky as I did and manage to eliminate the pee.
Posted by Calfkeeper at 8:36 PM

If you get him neutered, perhaps he will stop spraying on everything. My current crop of barn cats seem to be doing well. Of course, they're all females and not neutered. You know this is not going to bode well.