For the past 3 years or so the neighbors have had what they call Heritage Days at their farm across the river from us; in Windyville. It started, I believe, as a homeschool event and has turned into a sort of community get together.

Everyone involved or attending is encouraged to dress in 1800s outfits. There are multiple demonstrations or activities going on. It is much like a toned down Silver Dollar City-type of day.

It was super warm and all the women in their long skirts and bloomers (one person admitted to shucking hers) looked miserable. The whole experience gave those involved a renewed respect for the early pioneers and what they had to do to survive.

I have to say kudos to Tim and Carla, who are the ones who organize the whole shebang. This is the first year I have attended. It was interesting. Of course the most interesting demonstration I watched was the one I got so fascinated with that I forgot to take a picture of; the lye soap making. Oh, well. Below are some of the other attractions. 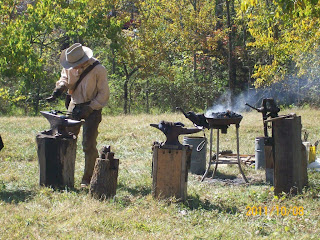 The sorghum making process was quite involved. Tim grew the sorghum there on his place: 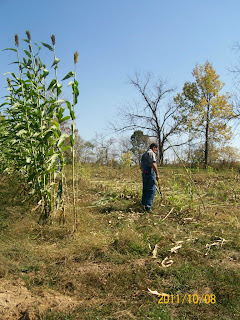 They harvested it, stripped it and then fed it through the sorghum press: 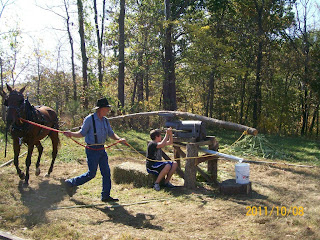 Then they put it in the pan/vat...whatever this contraption is called. They had to skim the green stuff off with those long scoops. Whew! That was a hot job also, you can see it steaming in the photo. 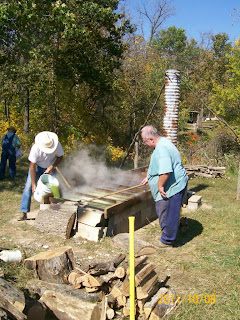 They worked on a quilt: 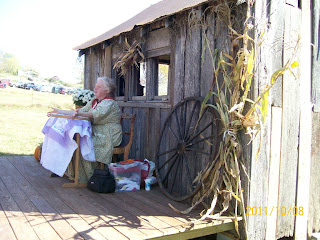 And stood around looked pretty: 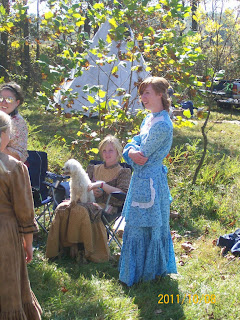 They also made shingles, spun wool, washed clothes by hand and had an outdoor survival course, but my blog is starting to protest at having too many pictures loaded into it. There were foot races for young'uns and funnel cakes for sale. Later in the evening the event was catered, but I didn't stay for that. It was, all in all, an enjoyable afternoon.
Posted by Calfkeeper at 8:07 PM