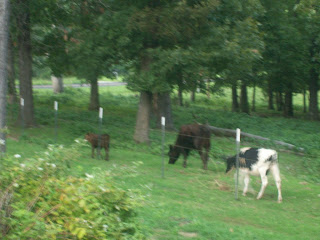 A few days ago, on Monday evening right after milking, we looked up the road and saw a little black cow and calf on the verge of the road, sniffing over the fence at our herd. We knew she'd end up being trouble of one sort or another. We were right.

We had no idea where she came from. We surmised she'd come from the little herd just behind the 12 acres across the road. But the owners live in Marshfield and we have no idea of their names or phone numbers. We hoped she'd go on about her business and find her way home. I didn't want to mess with her as she's a beef cow and they tend to be aggressive when they have a calf.

A couple of people either stopped and told us about "our cow" that was out (Nevermind the fact that we don't run beef cows.), or honked loudly and repeatedly as they drove by.

Finally, at about 8:25 pm, a car pulls in. It was the owner of the cow. She'd actually come from about 2 miles from here (hubby said the guy has the old Kiekebush place)! The guy, I will refer to him as "Ed" was in a panic. Didn't know how to get her back, didn't know what to do.

Hubby came back soon and the chase was on. During the whole thing the guy, who was totally unprepared for a cow chase in the dark, had the gall and audicity and no cell phone on him, to ask ME to call the sheriff and have them send a deputy out to guard the road so she wouldn't get hit.

To make a long story a bit shorter; hubby chased the thing for 1/2 hr or so in the dark. She was wild, I mean WILD!! She took out a 20-30 foot section of our garden fence-the posts were 20+ years old, so that's no big loss. Finally hubby got her herded back behind the milk barn and closed the gate on her. Hubby was frustrated as much by the owner as by the cow; the whole time Ed had kept up a chant of "I'm so sorry, I'm sorry" until Hubby told him to knock it off. hahaha...

She hopped a fence and is now in with our youngstock; heifers about 8-12 months old.

She is still wild as a buck. Her calf stuck to her the whole chase and is with her now. The blurry picture is about the best shot I could get of her.

The poor thing originated in Texas, was transported to Oklahoma and ended up in Marshall Missouri, where Ed bought her on Sunday. When he let her out Sunday night she lit a shuck and took out for the high hills. She just wants to raise her calf and be a good mom, but these two-legged fools keep messing her up. Was I her, I'd have taken off too.

The owner was going to just write her off. Hubby told him to give her a chance to calm down and we'd try and catch her in a week or two. She is coming to eat with our heifers, but she holes up down in the ravine during the day.

The end of this story could be interesting.

Posted by Calfkeeper at 8:21 PM

Oh my, I wouldn't want a cow who has been through that many states in with my calves. Lord only knows what diseases she is carrying.

Yeah, that's always a worry. But nothing we can go about it now. The place she's in is so treacherous that the only way would be to either chase her into the field with our milking herd, or onto someone else's property. I am not sure how we will catch her.