Ellen has it all figured out.

A few weeks ago she and her aunt were playing a game in which Auntie put a penny under a puzzle piece and Ellen turned all of the pieces over until she found the penny. At which point she'd shriek and carry on like she'd found the motherload of gold. When it was time to leave Ellen took the penny; Auntie told her she could put it in her piggy bank. Last weekend this happened again. Ellen took great joy in putting the pennies in her piggy bank.

One day here at home she also found a nickle on the counter, one I'd rescued from the washing machine. Voila! Ellen trotted to her room to put it in her piggy bank. She was excited. She kept asking for more "pennies" to put in her bank. I found her a couple that had been lying around for a bit. You know how they tend to collect. She was mighty pleased.

Then this morning as I was fixing her breakfast I heard her talking about pennies. I went into the bedroom and found this scene: 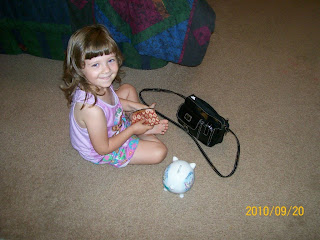 Why ask for pennies when you can just go straight to the source and load up your piggy bank all by yourself?

That's just what she did. The little moneygrubber emptied my coin purse; quarters, dimes, nickles, pennies...all into her piggy bank. She didn't get over a dollar maybe. I am one of those annoying people who will scrounge around for the correct change when I am paying in cash...and I pay with cash ninety percent of the time.

Well, I can start collecting change all over again. Thanks to Ellen.
Posted by Calfkeeper at 2:17 PM

in a way that's funny

jel-haha actually it was pretty funny. She had that "cat ate the canary" look on her face. The little stinker.