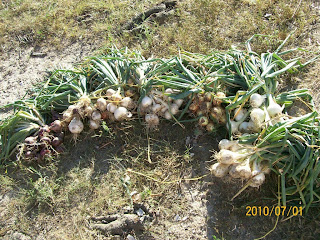 Here is a picture of about half of my onion crop. Most of the rest of it is still out in the garden, waiting until I get a chance to harvest it. I am going to chop many of these up and freeze them for later use in stir-fries or soups. It cuts down on prep time. I do not eat raw onions; they come back on me something awful. But hubby and Ellen love raw onions. Hubby likes them sliced up with cucumbers in salted vinegar water. I eat the cukes, but not the onions. Ellen eats the onions but not the cukes. She frequently has onion breath.

This week I am slaving away at VBS. I am teaching the preschool class. So far I have had 6 students in my class each day, though we originally started off with 7. One student decided to move up to the next class with his grandma; which was fine with me. He is one of those squirrelly kids you can't keep still anyway. I forgot to take pictures today, but I will try to remember tomorrow. Thankfully there have been plenty of helpers in my class, as most of the kids would bail out if their mom or cousin weren't there.

Ellen is having a blast during VBS, though she won't get far from me. But still, I have high hopes that she will do well in school eventually.

That's all for today.
Posted by Calfkeeper at 2:30 PM

My kids have always loved VBS! Have a fun week!