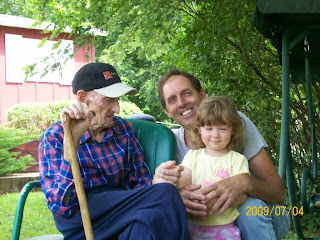 (Edited to add correction: Electricity came to this area in the '50s. They got running water in '68. OK dear, I think I got it right this time!)

The Fourth of July came and went. We had a nice barbecue down at MIL's place. The weather was quite cooperative, so that was good too.

July 4th was also Grandpa's birthday. This year marked his 94th. Ninety four years old. What changes he has seen in his years! Back in his day a car in this area was a rare and wonderful thing. Electricity didn't arrive until the 50s and running water came in '68 when hubby's family got a well (my hubby was 10 years old already!)and babies were delivered at home. Children were plagued with rickets because malnutrition was common.

Grandpa was the youngest of about 8 kids (I think); 7 boys and one girl. His mom died when he was 5, so he was pretty much allowed to do as he wanted. He tells tales of riding wagons and and trading horses. He worked at many jobs, often traveling far to reach them. He loved to hunt and fish and didn't shy away from a fistfight if it was called for. He was married 65 years and had 4 children; only 2 of which survived infancy. He still prefers to have his meals cooked on a wood stove.

He is altogether a fascinating character and I am privileged to have known him as long as I have. I hope there are more happy birthdays for him.
Posted by Calfkeeper at 9:21 AM

Glad to hear he is doing good,
that is a very good pic of the 3 of them, she is getting to be more and more of a cute~T~pie,

grandpa, and my dad loved to talk on the phone for hours, just like teenagers :)

Happy Birthday to your Grandpa! 94 years old...that's amazing! :) Yes, so much has changed in his lifetime. Wonderful that he has been able to experience and witness so much!

Belated Happy 4th to you guys!

jel-yes, he's quite the talker even now, he just can't hear anything any more.