Rosie and her red calf 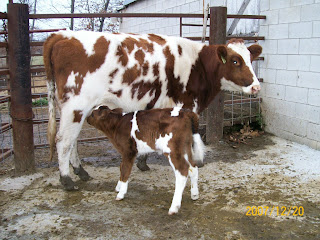 Yesterday morning I went up the road to do the feeding and Rosie wasn't there with the herd. She gave me quite a scare because I didn't think her udder was big enough for her to be close to calving, but finally, after I'd driven all around the pasture, in the half-dark mind you, dodging limbs and stumps and all, I found them; Rosie and her calf. I was so relieved to see her standing up and with a live calf standing next to her I almost cried.

Yes, it's a little heifer calf, and RED like her mother. A little bit darker red, but red just the same. Rosie doesn't have much of an udder, as you can see in the picture, so unfortunately she might become a cull later on down the line, but for now I am just happy she didn't croak in calving and that she had a red heifer that I am not going to worry about that.

I couldn't get the camera to cooperate with me, so that is why Rosie has this demented gleam in her eye-the flash kept going off, but all in all the pic came out OK. Aren't they pretty?
Posted by Calfkeeper at 2:18 PM

Seeing that picture reminded me of the part in the the book "The Fog" by James Herber, where the cows go mad and attack the farmer. :D

Oh! They are both beautiful! I love calving season! My only problem is that I get so attached to the calves. They're so sweet!

Calving season for us is not until the end of March. Can't wait! :)

c: I get too attached to the calves too. It's one hurdle I will never overcome on the dairy.

I tell you what I'll give you a shout on mine.