In tribute to what those in Oklahoma and other areas of the Mid-West are going through, here is a poem from one of the masters of poetry, along with a couple of photos I took from our ice storm back in January. I feel badly for those who are going through it now, I remember quite vividly how horrible it was to be without power. We were without power for 9 days and it was awful. We had to milk using a generator, and we went down to husband's mom's place to sleep. It stayed cold-well below freezing-for so long and the ice didn't melt and the limbs kept falling and we had to slip and slid around on the ice doing chores. A veritable nightmare.
The first pic is a shot of husband's granddad's place and the damage to their shade oak tree. It has recovered a bit by now, but it's still sad. The second pic is some dogwood buds on ice.
Robert Frost had it right; ice is great for destruction... 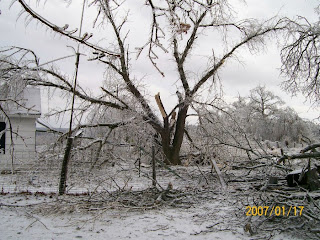 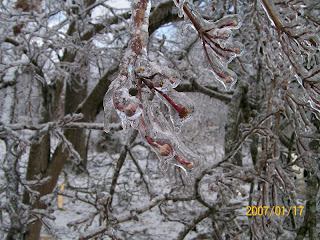 Some say the world will end in fire,
Some say in ice.
From what I’ve tasted of desire
I hold with those who favor fire.
But if it had to perish twice,
I think I know enough of hate
To say that for destruction ice
Is also great
And would suffice.

Robert Frost
Posted by Calfkeeper at 9:14 AM

and did ok, but for the last day ,

I love Robert Frost, and that's one of my favorite poems. We have ice here in the Kansas City area, but not enough to put us out of electricity. I took some pictures yesterday and posted them in my blog.

This is excellent. Amazing photos and a wonderful poem.

I have never been without power for more than a day or so...I have been thinking of the people in the Midwest who are dealing with all this, and the farmers in the floods in the Pacific Northwest who lost their animals and their crops, and the families who have lost their homes in the floods.

A very tough December for a lot of people...

Yes, I have heard about the flooding in the NW and that is a grief too. I can't imagine having to stand and watch has your herds are drowned. What a tragedy. My prayers are with them as well.