The Beginning of the End

When I signed up for this gig, (i.e. got married) I knew that Dairy Daze wouldn't last forever; and it probably won't end any time soon, but this summer seems to have hastened the beginning of the end.

We had an awful drought back in 2012.  We started feeding hay in mid-July.  But in the 5 years since then, 2013-17, we had some really wet summers.  So much so that we had a bit of a stockpile of hay going on.  So this past year Gary decided to use up as much of our old hay as possible.  This leaves us this year with minimal hay on hand.

This summer has also been a drought.  We made it through July on what grass was in the field, and on a couple rainfalls of 2-3 hundredths of an inch of rain.  But Aug 9th Gary started toting hay to the dry cows. 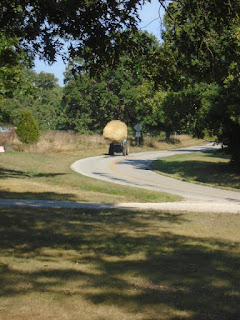 A few days before he'd sold all of our open heifers in Windyville; about 16 of them. We can't afford to have dead weight around here; so to speak.

Then on the 7th, our hay guy from out western MO came and bought our little heifers: 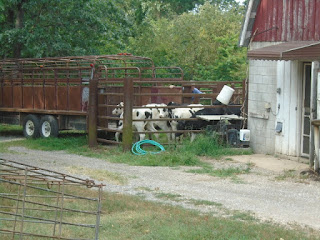 And off they went.  I was sad.  I still am; though it does mean I will have a much easier job this winter.  Not as much feed to haul up the road, and fewer ponds to chop hole in the ice.

That will be nice.

But we did keep our three little ones; one weaner and 2 still yet on the bottle.

And we kept Anne-Shirley, of course, and Wart Head: 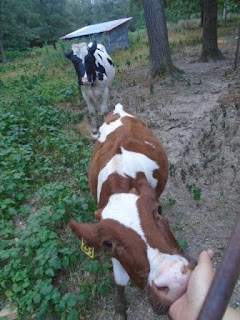 I will leave it to your perspicacity to figure out which is which.

Wart Head should have gone with the first batch, but as per her moniker she has a bad case of warts and we figured no one would buy her.  So she was forced to remain here.

Anne-Shirley needs must stay here, she has become a big pet, and Ellen would have a breakdown if we were to sell her.  I am not sure what will become of her when we actually DO go out of the business.  It would probably behoove us to train her to be quite tame and all so she could become a family cow eventually.  But I dunno.  She has all the traits of becoming a pain in the hiney on down the road; pushy like.

At any rate.  Gary is not sure that we will go ahead and build our heifer supply back up; you know, not replace any of the milking cows as they retire.  It is all in God's hands, how HE will lead us.  I refuse to worry about it.

(Thankful:  Less work this winter.  A calf that likes to be petted and scratched.)

Posted by Calfkeeper at 5:24 PM