I was going to tell our 2011 Calfornia trip story from the beginning; but how boring is that? So I will start with one of the funnier pictures I took.

The Saturday before we left my mom (from here on out referred to as Mom) Ellen and I went over to the place where I grew up, Mom had had to sell it after my father passed away. The folks who bought it own a landscaping business and have fixed it up so nice. They have a garden, numerous fruit trees (most of which were the ones my father planted there many years before he died), berry bushes...etc.

Down in the back they have a pen and raise a couple of pigs to butcher every other year I believe. They happened to have 2 fairly small porkers this year. So we went down so Ellen could see them. The lady gave them a couple of dog bone treats to get them to come out. I had Ellen stand in front of them so I could take a picture.

Well, Ellen complied, but not without a certain dubiousness, which shows up so well in her expression in this particular photo. After all, when you are only four years old even two little pigs seem quite large, and their grunting and shoving at the wire behind you would make anyone kind of nervous. 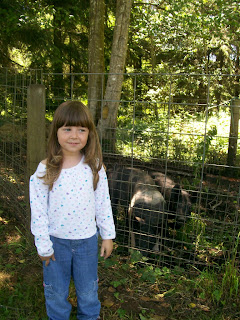 Posted by Calfkeeper at 1:58 PM

that is a very cute picture! :)