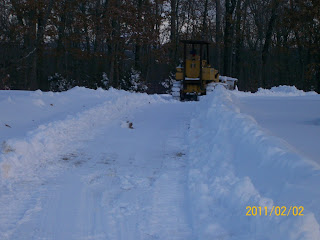 Yesterday we got about 12 inches of snow. In one place I measured 11 inches, in another 13, so we figure somewhere in between. Hubby had to get out his little bulldozer and clear our driveways and all. He had to doze his way out to the field and make paths for the 4-wheeler so he could do round up and get hay out to them. He had to doze his way down to the little heifers out in the woods so we could feed them.

This time Ellen isn't so enchanted with snow. Just a bit ago, while we were out doing chores and she'd clambered and stumbled and slipped around, she said; "I hate snow." Poor kid. It's tough when you have short little legs. Not to mention that it's currently in the single digits out here, with a nippy wind blowing the index down below zero. But nothing will do but that she come out with me and then have one of us take her down to her grandma's place. Last night, before hubby'd been able to doze a 4-wheeler path down there, she had to stay home. She wasn't happy.

As is usual when we have any kind of big storm; one of the cows just HAS to have a calf. We knew she was close so on Monday we brought her back down here. She could have had it then, BEFORE the snow, but NO, had to have it now. At any rate, it's a little heifer and she's doing well; just slugged down her bottle.

Our road still hasn't been completely cleared. The snowplows made one pass this afternoon and blazed a one lane trail, but it's still iced over. This morning as he was putting out hay hubby saw tracks of neighbors who'd tried to get to work and had had to turn back. Someone even landed in the ditch. He had to steer the tractor with the brake; it's a mess out there. And this isn't even half as bad as what other places are getting.

We are praying for a warm-up and a fast thaw.
Posted by Calfkeeper at 7:50 PM